Sounds crazy, but if you really want to lose weight, the gym should be your last priority, the celeb trainer says. Here’s why—plus his four-step method for success. 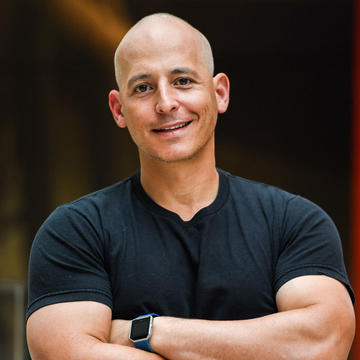 You may know Harley Pasternak as the celeb trainer responsible for sculpting the bodies of Megan Fox, Katy Perry, Rihanna, and Kim Kardashian—just to name drop a few. But you’ll also soon be seeing Pasternak in Khloé Kardashian’s upcoming reality series, Revenge Body, premiering on E! next week.

One of eight top celebrity trainers featured on the show, Pasternak shares that he took a drastically different approach to training. “The women I worked with had a very different experience than the other women on the show that were paired with other trainers, who are mostly traditional, group fitness trainers—they put them through fun, great, tough workouts,” he says. (Take for example, Lacey Stone’s 20-minute “Revenge Body” workout.) “For me, that’s the least important part of a transformation.”

As Pasternak explains, “There are 168 hours in a week, and even if you’re working out two, three, four, or five times a week for an hour, you’re still not working out at least 95 to 98 percent of the week. So it’s what you do during that time that’s far more impactful than what you do in the gym.” That’s why the women Pasternak was teamed up with weren’t allowed “anywhere near the gym for the first two weeks.” Yep—really!

“I took myself out of the equation and gave them the tools instead of being the tool. For the average person at home, they should know they don’t need a celebrity trainer. It’s all about your habits outside of the gym,” he says. And although Pasternak explains that the women he was partnered with actually wanted to quit the show at first (“they thought they were signing up for free training!”), they actually lost “exponentially more weight than the other women who were doing these hardcore, balls-to-the-walls workouts.” And, more importantly, according to Pasternak, months after filming, their results have only gotten better on their own.

Here, Pasternak explains the method to his madness, and why you should really take these four steps before hitting the gym if you want to reach your weight-loss resolution in 2017.

While Pasternak didn’t have the women hit the gym for the first two weeks, he did have them moving. “The first thing I did was give them a Fitbit and a daily step goal. First, we started at 10,000 then 12,000, and eventually worked up to 14,000 steps per day.”

So, yes, if you’ve set a goal to lose weight, you really can avoid the too-crowded gym and still have success, according to Pasternak. “We put too much focus on the workouts and not enough on perfecting daily activity. Instead, I wanted to emphasize how important it is just to get walking before they thought about lifting weights or lunging,” he says.

And when the women did hit the gym after two weeks—already lighter, healthier, and fitter at this point, Pasternak adds—”they were blown away by how simple my workouts were. I picked an upper-body, lower-body, and ab exercise, had them cycle through a few times, and they were out of there in 20 to 25 minutes,” he says. (Here, more from Pasternak on how to get fit without the gym.)

The next thing he did? Put the women on his Body Reset Diet (it’s also the title of Pasternak’s 2013 bestselling book). This means, for the first five days, three smoothies and two crunchy snacks per day. (Pasternak recently partnered with Jamba Juice to create Body Reset Diet smoothies, so you can snag his recipes at Jamba locations nationwide.) The next five days, replace your dinner smoothie with a regular solid, single-dish meal (otherwise known as an “S” meal)—smoothie, soup, salad, sandwich, stir-fry, sushi, Pasternak explains.

The reasoning? “It resets the metabolism, digestion, and appetite,” explains Pasternak, whose background is in nutrition and exercise physiology. “The number-one reason people give for not eating well is that they say they don’t have enough time to grill, poach, steam, etc., so this lets them make something delicious that will keep them full, and that they can also have on the go.”

3. Focus on Your Sleep

The third part of Pasternak’s plan for the women on the show was simply to focus on sleep. “Although sleep is supposed to be one-third of our lives, we don’t get enough sleep or quality sleep, and studies show that people who don’t get enough quality sleep gain more weight,” he says. (That’s because hormones that control hunger skyrocket, and those that tell the brain you’re full are suppressed.) More on that here: Why Sleep Is the No. 1 Most Important Thing for a Better Body

Pasternak also had the women he was teamed up with unplug from their phones, computers, and other screens for at least one hour per day, since, as Pasternak explains, “Studies show that the blue light emitted from our screens has been shown to mess up our sleep patterns, mood, and appetite.” (Interested in becoming less dependent on your tech? Try our 7-Day Digital Detox.)